Trish Burr is an embroidery artist from South Africa, who uses her amazing silk shading skills to create these stunningly detailed works of art!

Inspired by nature, Trish Burr does not hold back on colour, using luscious threads to create incredibly details pieces that do not underestimate her colourful Cape Town surroundings.

Trish Burr calls her work ‘miniature needle painting’, which we think is the prefect description! It’s delicate, detailed and intricate. Just stunning. She also has a range of books available to buy that describe how she works, and provide detailed instructions on how to stitch like her! 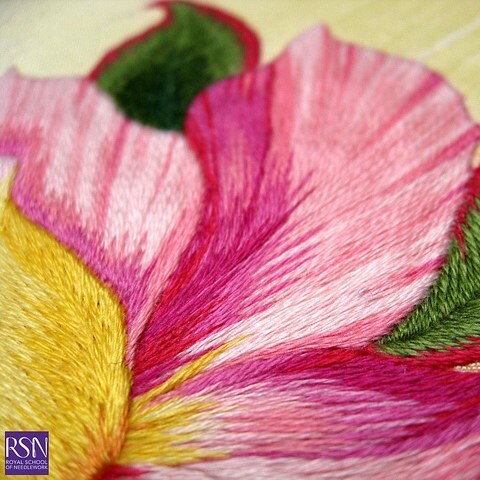 You requested and we heard you, so the London Embroidery School is now working on a brand new course for you which will be Silk Shading. This super delicate technique is sometimes known as ‘painting with a needle’ as it combines a number of different coloured threads and needles to be used simultaneously in order to artfully blend them together. For this reason it is often used for naturally themed works, such as fruit, flowers and animals. Floral Silk shading worked and designed by Noo B

This technique uses a variety of stitch lengths to create the natural appearance keeping an emphasis on blending colour, tonal and shade.

The style is thought to have originated in Far East where evidence of the technique has been found in artifacts from 5000 years ago in the Zhou Dynasty, Jiangu province of China. It was not until the 10th Century AD when it received Imperial recogniotion that it was elevated from being consider a domestic handicraft, to an art form.

Regional styles formed with subtle differences between them including Suzhou, Sichuan, Hunan and Guangdong embroidery. Of these, Suzhou shone the brightest and as time went on silk shading can also be know as Su embroidery.

It was not until the 15th Century that the west became aware of the technique and Italian painters started to explore it in religious works. Nowadays, artists/embroiderers such as Emilie Ferris has put their own take on silk shading and create portraits like the below using the subtle nuances of the technique to create very life like representations.