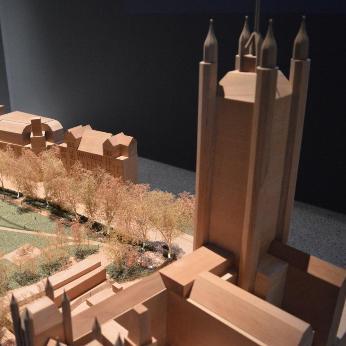 British based Architect of Ghanaian descent, Sir David Adjaye OBE, known for his beautifully and carefully thought out landmark structures within the architectural world, is showcasing his past, present and future work at The Design Museum.

Adjaye’s international recognition comes from his ability to immerse himself and fully understand a culture’s past in order to design and build a structure that not only holds the information and artefacts of that specific time, but holds the memory and tells the story of those that were involved and lost during those times. Throughout the exhibition, every room is dedicated to a specific building that has been designed by Adjaye to hold, preserve and experience the memories of that specific time. 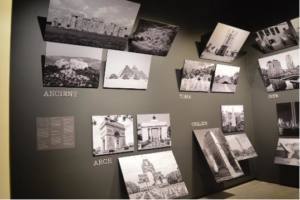 When you first enter the exhibition, you are met with an introductory room with images of well-known historical landmarks. Here, Adjaye introduces himself with a written statement giving his opinion on how structures of remembrance should be designed, as well as what the exhibition will entail. 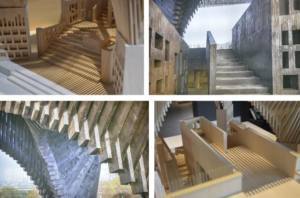 The first official room of the exhibition was dedicated to the Gwangju River Reading Room which Adjaye was invited to help design. Collaborating with writer, Taiye Salasi, this structure was intended to be designed and made in remembrance of the hundreds of students and citizens who were killed in the South Korean city of Gwangju’s ten day uprising in May 1980. The exchange of book and ideas in this space was intended to keep the memory of those who passed, alive.

The room was dimly lit with the small scale model of the designed reading room, which sat in the middle. Images of the real reading room were lit up on one side of the room and a book shelf on the opposing side. The sombre feel of the room reflected the events, being immersed into the experience of those who suffered all those years ago. 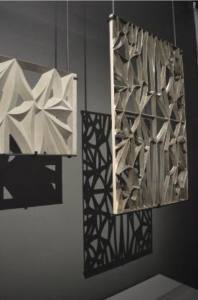 Moving onto the next room, showcasing a landmark, located in Washington’s National Mall which was solely designed and made to remember as well as celebrate the African American community and their contribution to building America during slavery. Adjaye, knowing and learning about their history, came to know the contribution that African American slaves had in many trades including ironwork. From this information, the exterior panelling of the building honours this trade and the slaves that contribute to it. This is only a small snippet of the how Adjaye and his team designed this building to honour and most importantly remember the lives that were lost during slavery in America.

One of Adjaye’s smaller and temporary structures was the Sclera Pavilion which was made to be a safe space for self-reflection and contemplation for the public, designed in the shape of an eye. Within the room that was dedicated to this building, was a life size version of the design in the corner of the room. Different levels of wood, with different widths, descended from the ceiling gave the room a feel as to what it would have been like within the structure, alongside a smaller scale model of the building which sat in the middle of the room. This room, unlike the others, was lit up changing the feel and overall experience of the room. 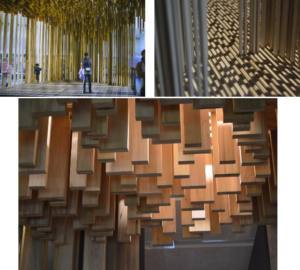 Out of the 22 countries directly involved in the Second World War, the UK is the last to build a memorial to commemorate the horrific event in our history. However, this is about to change with Adjaye’s proposed plan of a national landmark for the remembrance of the Holocaust which is to be finished in 2020. The memorial will sit next to Parliament,  with the proposed design including a powerful architectural memorial above ground where 23 bronze fins are located which lead to underground exhibitions which reflect the 22 countries before us who have remembered. This building looks to be architecturally striking and I urge you, when it’s built to go and see this long awaiting structure and exhibitions. 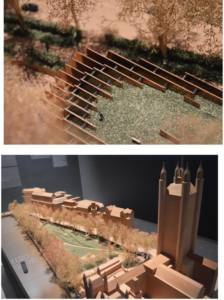 There was so much more amazing things to experience and learn about these structures from this, as well as the other rooms that were dedicated to the Adjaye’s planned proposals for structures such as the National Cathedral of Ghana and the Mass Extinction Memorial Observatory. This exhibition left me in awe. The showcase of all the memorials allowed me to enter that time and learn the importance of remembering the past so that we can shape our future the right way by learning from our mistakes. This exhibition should not be missed!

For ticket pricing see the Design Museum for further details