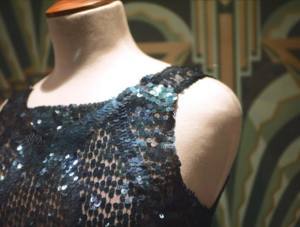 Beautiful sequined gown, early to mid-1930s. Sequins became popular in the 1920s, inspired by the discovery of Tutankhamun’s tomb. (1922)

The 1930s followed the decade of the roaring 20’s, with the Wall Street crash in 1929, the years that followed saw a great deal of change for Britain and America. With the 1930s, came the beginning of WWII, the end of the Jazz Age and a dramatic change in fashion in accordance with the economic and political transformations of Western society. 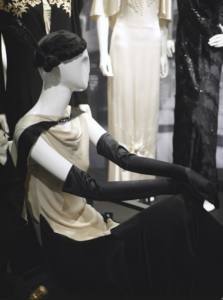 This exquisite exhibition is based around a single collection (courtesy of Cleo and Mark Butterfield) consisting of 1930s daywear and eveningwear. The exhibition began with an array of classic dresses, would have been at the height of fashion in the 30s. The impact of the Art Deco movement (which took its name from the international Arts Décoratif et Industriels Modernes held in Paris in 1925) on fashion in the 30s was profound; it was characterised by highly stylised natural and geometric forms. Something that struck us as soon as we walked in was how much the fabrics used to construct the garments were angled towards the act of wearing; specific fabrics such as satin and crepe were used to glisten in the lights of a nightclub – the wonderful art of using materials for their glamorous properties! 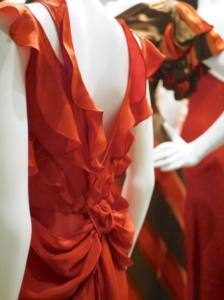 Glamorous. Chic. Timeless. Three words that instantly spring to mind when a vision of floor length satin and crepe gowns appeared like a mirage through the walls of the fashion and textile museum. These liquid satin, bias cut gowns – pioneered by Madeleine Vionnet – ooze sophistication and sensual night-time glamour. On the dance floor of the 1930s, everyone was equal; all class, economic and racial differences were left on the side lines. 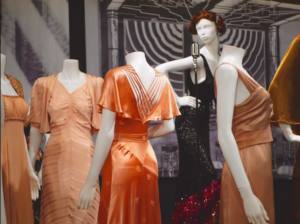 Cinema became part of everyday life in the interwar years; Cinema buildings popped up all over the country; housewives would be able to view a matinee screening and still be home in time for the children! The silver screen was an immense factor in the glamorisation of evening wear fashion in the 1930s and the rise of ready to wear garments; cheaper fabrics such as lamé were favoured over traditional embroidery, which was not quite as decadent but almost as lustrous. 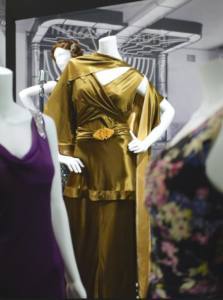 Evening gown, early 1930s, satin. The glamorous style was reinforced by Hollywood during a decade of luxurious films that provided the much needed escapism from the realities of daily life.

In the room called ‘Whistle! While you work’ it was clear that the major shift in working class women becoming mass consumers was aided by media outlets such as magazines, it was explained how this shift has been an important factor in how we shop today. The popularisation of department stores and the philosophy of ‘make do and mend’ in the austerity of The Depression also led to a much more accessible ‘Ready To Wear’ trend rising. This revolution in ready to wear clothing could be seen of as a factor in our current fast-fashion crisis. 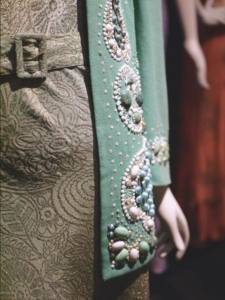 Evening gown and jacket, mid 1930s. Heavy embroidery of the previous decade were discarded and replaced with cheaper fabrics such as lamé.

The 1930s gave way to the act of shopping (usually in department stores) and window-shopping becoming part of popular culture. The advancement of technology and women in the workplace (pre marriage, of course, due to the ‘marriage bar’ forcing women to resign from their jobs when wed) meant that fabrics could now be produced on a much larger and therefore cheaper scale.

The 1930s were a golden age for the art of the portrait photograph. On show was a vast selection of portraits from 3 leading studio photographers; Dorothy Wilding, Madame Yevonde and Paul Tanqueray.

The finale of the exhibition wowed us with a patriotic display of all things red, white and blue to commemorate the coronation of George VI. An interesting note which helped us imagine the atmosphere of the day was added in the exhibition guide: ‘Hotels were full to the seams and many people who wanted to catch a glimpse of the royal coach resorted to sleeping on pavements and in the parks, creating camps and latrines, which author Virginia Woolf likened to scenes of the Crimea.’ 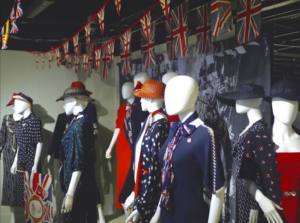 Some Day My Prince … Will Come! A section of the exhibition celebrating the coronation of King George VI on 12 May 1937; all things blue, red and white lined the streets of Britain.

The exhibition was a delightful insight in to all things 30s, from the glitzy gowns of the dancehall floors to the realities of women being barred from the workplace: a truly comprehensive experience! 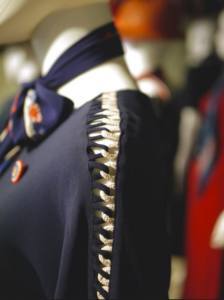 Dress, late 1930s, crepe. Blue was a popular colour of 1937 as it was considered patriotic. ‘Marlborough blue’, in particular featured heavily in this year and was named after the royal palace.

Children under 12 are free